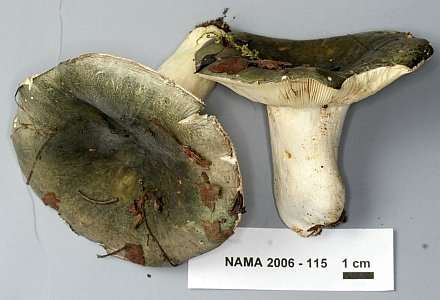 Cap: 5-15 cm in diameter, initially subglobose, later convex; flat and often depressed in the center when mature; thick, fleshy and very firm; verdigris-green or pale-olive-yellow with rusty-brown spots; it is usually dry with small flocculose patches or warts; when mature it splits at the margin and the cuticle cracks and shrinks; cuticle not easily peeled.

Gills: free to adnate, crowded, 5-10 mm wide and not attached to the stem; initially white, later cream; brown at the edge when mature.
Stem: 6-12 cm long, 1.5-4 cm thick; cylindrical, firm and solid when young but spongy, brittle and white when mature, turning yellow when bruised.
Flesh: very firm and crunchy when young, becoming soft and brittle in age; white, often turning rusty-yellow when cut.
Spore print: white, sometimes pale cream.
Spores: subglobose, with short spines (echinulate) and fine dots forming an incomplete network, colorless, 8-9 x 7-8 µm.
Taste and odor: mild.
Edibility: listed as edible; however, be aware that hydrazine derivatives have been detected in this species (Chiarlo et al., 1984).
Habitat: on the ground in small groups, often under beeches and birches in deciduous or mixed woods; more common in dry weather when other mushrooms do not thrive; June to October.

R. parvovirescens is a similar but smaller species that has been mistaken for R. virescens or R. crustosa. It may be readily distinguished from the latter two species by microscopic characteristics (Buyck et al., 2006). 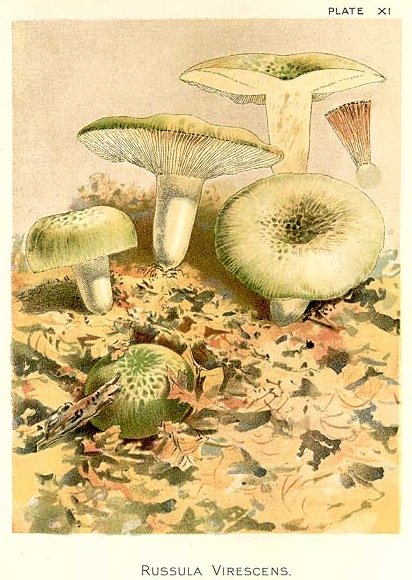 The Chinese study above also showed that rats given high and low-doses of the mushroom had lower levels of serum and liver malondialdehyde (a biomarker used to measure levels of oxidative stress), and increased levels of the enzyme superoxide dismutase (Wang et al., 2005).

Polysaccharides extracted from the mycelial culture of R. virescens and administered intraperitoneally into white mice at a dosage of 300 mg/kg inhibited the growth of both Sarcoma 180 and Ehrlich solid cancers by 70% (Ohtsuka et al., 1973).