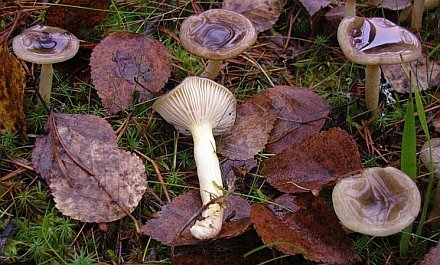 This mycorrhizal mushroom thrives in cooler weather, and as its common names suggest, often does not fruit until after the first frost of the season. According to Bas et al., 1990 (p. 128), H. hypothejus var. hypothejus differs from var. aureus in having an olive-brown to red brown central cap coloration cap rather than orange-red.

Interestingly, the otherwise common polar lipid phosphatidylcholine (PC) is noticeably absent in this species, but present in other members of the genus (Vaskovsky et al., 1998). However, this mushroom does contain a significant amount of the betaine lipid 1,2-diacylglyero-O-4′-(N,N,N,-trimethyl)homoserine (DGTS), thought to have biochemical functions similar to PC.

Polysaccharides extracted from the mycelial culture of H. hypothejus and administered intraperitoneally into white mice at a dosage of 300 mg/kg inhibited the growth of Sarcoma 180 and Ehrlich solid cancers by 70% and 80%, respectively (Ohtsuka et al., 1973).

Both Fungi of Poland and Fungi of California have pictures and descriptions. A number of photos at BioPix further demonstrate the variations in cap color observed in this species.