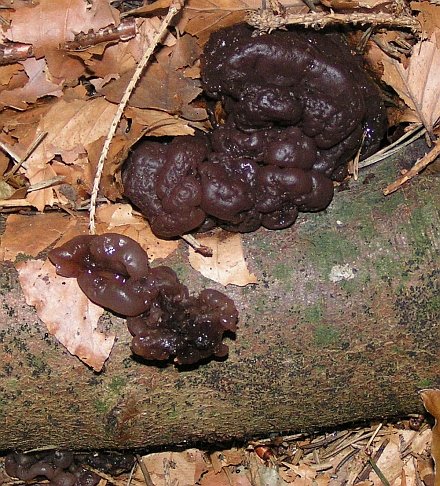 In a 150-year old treatise on English botany, (Sowerby et al.,  1846, p. 225) it is mentioned that according to Dillenius, this species earned its common name “witches’ butter” because it was believed to be useful against witchcraft when thrown into a fire.

The fruiting body will dehydrate to form a thin membrane, but will rehydrate when moistened. The fruiting bodies are somewhat translucent when young and fresh.

Polysaccharides extracted from the mycelial culture of E. glandulosa and administered intraperitoneally into white mice at a dosage of 300 mg/kg inhibited the growth of Sarcoma 180 and Ehrlich solid cancers by 100% and 90%, respectively (Ohtsuka et al., 1973).

California Fungi, the Fungi on Wood site, and Biolib all have more photos or descriptions.